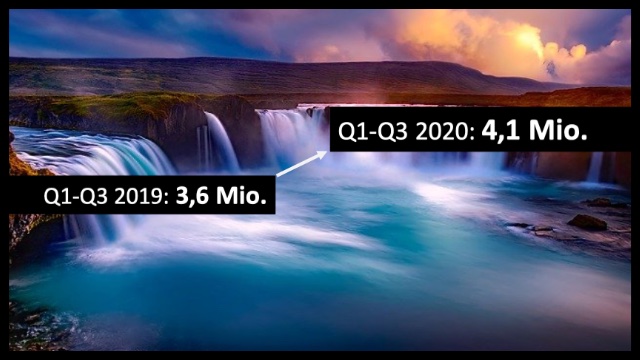 In a very stable market environment, around 4.1 million smart TV sets were sold in Germany in the first nine months of 2020 according to GfK Retail & Technology - almost 14 percent more than in the previous year (Q1-Q3 2019: 3.6 million). The share of smart displays in the overall market was 88 percent - around five percentage points more than in 2019 (83 percent). In total, more than 44 million smart TVs have been sold in Germany since 2012. Of these, more than 90 percent support the HbbTV standard and thus the use of interactive services via the "red button" on the remote control. The trend towards larger screens is continuing, with demand for TV sets with diagonals of more than 65 inches increasing noticeably: in the period Q1-Q3 2020, just under 220,000 of these TV sets were sold in Germany - around 18 percent more than in the whole of 2019 (185,000). The segment of smart set-top boxes also recorded strong growth compared to the previous year with almost 280,000 receivers sold (2019: 135,000).

Carine Chardon, Managing Director of Deutsche TV-Plattform: "Smart TV offers the full range of moving picture services from classic linear TV to the popular streaming apps and numerous niche offers. Especially on the large screens, which are in great demand, it is especially fun to watch films and series, whether with the whole family or alone on the couch. The high picture quality and the increasingly personalisable surfaces round off the user experience and make television attractive - even for younger viewers".