What is Addressable TV, what do „Switch-In“ and „Dynamic Ad Insertion“ mean? What role does addressable advertising play today and in the future – and where does the subject stand in terms of standardisation? These and other questions were explored by the panel on addressable TV of Deutsche TV-Plattform at the Media Days Munich 2020 under the motto „Aim well, score well – addressable TV“.

Stefanie Jäckel, General Director Strategy & Development of Ad Alliance, opened the panel with the keynote speech „Where do we stand on the way to optimal orchestration of mass reach and targeted advertising? The industry has been dealing with the opportunities and challenges of Addressable TV (ATV) for a few years now, but the broadcasters were initially rather sceptical as to whether ATV was a good idea from a strategic point of view. With television as the number one advertising medium, reach can be built up quickly and broadly and ATV should not lead to advertisers simply saving contacts or reallocating their budgets. This is not the case, however, as ATV builds a bridge between large reach in classic television and online advertising and their booking logic. According to Stefanie Jäckel, customers benefit from both worlds: Those who already run classic advertising on linear television will not cut this reach, but can additionally benefit from the digital possibilities, for example by extending advertising spots or creating incremental reach through ATV. Conversely, customers who have so far relied on digital campaigns could achieve greater reach through the mass medium TV.

In order to see how well ATV already works in practice, a distinction must be made between different forms of advertising. In the case of a „switch-in“, viewers – with an HbbTV-capable TV set connected to the Internet – see a short advertising insertion when switching to another programme, which can already be played out in high quality with lower data volumes without any problems. „Switch-Ins“ are already available on around 18 million TV sets in Germany, and is therefore easy to cluster. Targeting is done according to viewing behaviour or the interests of the viewer, but not on a personal basis, but always on a device basis.
In contrast, the supreme discipline of „Dynamic Ad Insertion“ (DAI) is still being built. With DAI, individual spots in existing advertising blocks can be dynamically exchanged and thus tailored to viewers and their interests. In order for this to function smoothly from a technical point of view, however, the HbbTV standard for Targeted Advertising (TA) still needs to be implemented. This will take place from 2021 with the introduction of HbbTV 2.0. According to Stefanie Jäckel, alliances at European level, for example with manufacturers and infrastructure operators, are necessary for the introduction of HbbTV-TA. She expects that in 2025, around 30 to 40 percent of TV sets in TV households will be able to dynamically exchange commercials.

In addition to standards and industry partnerships, the overall success of ATV depends on proving its impact to advertising customers, optimally orchestrating the total advertising time allowed per hour between classic advertising and ATV and above all: Keep ATV simple! This applies to the product definition, KPIs and their measurement as well as the booking logic for advertising customers. If these conditions are met, Stefanie Jäckel sees a lot of potential for ATV to noticeably move the market in the coming years.

Convergence of broadcasting and the online world
In the following talk, Dr. Oliver Friedrich, Global Partnerships, Broadcast & Entertainment DACH for Google, also underlined the relevance of standardisation. It is not without reason that Google has been involved with DVB and the HbbTV organisation since this year. The trend in the distribution of audiovisual content is clearly towards IP and it is therefore important that DVB and HbbTV standards take this development into account. Traditional broadcasting would have to move technologically towards the digital advertising world by incorporating proven technology from the online/app world into the HbbTV ecosystem and integrating it into the standard. As an important element, he pointed out that cookies, which still play a central role in the HbbTV standards, are already being technologically replaced in many areas. From Google’s point of view, there is an answer to this: a „Unique Identifier“ which can be used for both broadcasting and IP. This process has started, but standardisation and a subsequent market launch of corresponding devices will take a relatively long time.

Deutsche TV-Plattform is addressing the topic of addressable TV within the framework of the AG Smart Media. The task force „Glossary ATV“, which is based there, is currently working on a glossary for the classification and delimitation of Addressable TV. 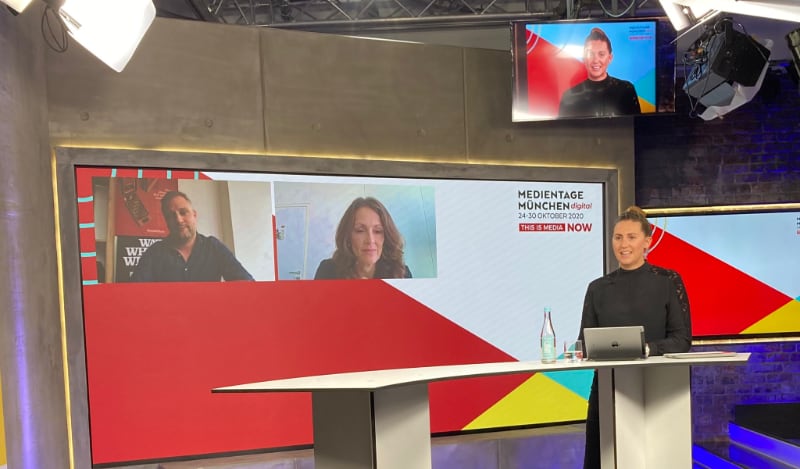 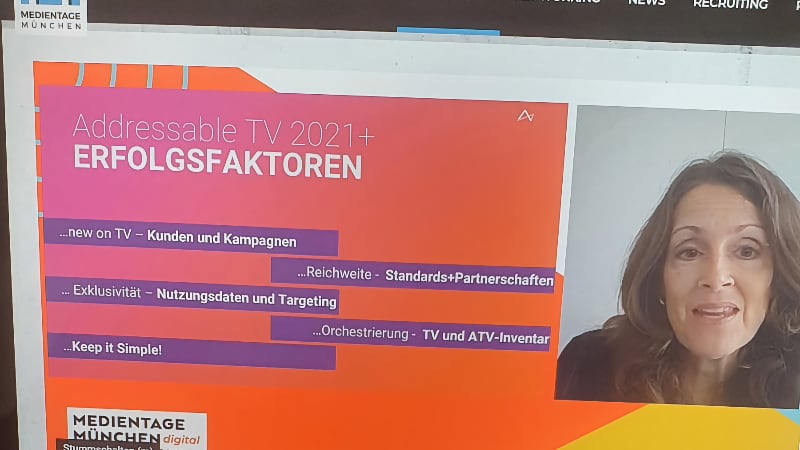 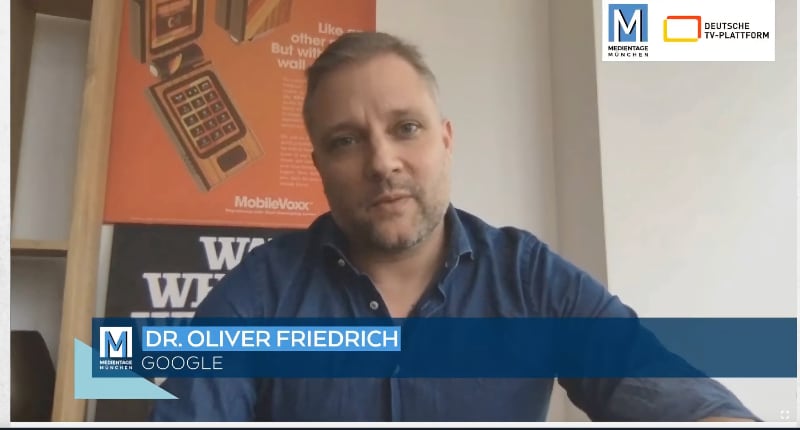 Under the motto „Aim well, score well – Addressable TV“, Deutsche TV-Plattform is organising a panel about Addressable TV as part of the Medientage München. It is embedded in the Connect@MTM20 thematic block, which will be moderated by Carine Léa Chardon, Managing Director CE and Satellite & Cable, Head of Media Policy / Media Law ZVEI, Managing Director Deutsche TV-Plattform.

Members of the German TV Platform have the opportunity to purchase discounted tickets for Medientage München. If you are interested, please contact the office.

Keynote
„Where do we stand on the way to the optimal orchestration of mass reach and a targeted approach? “
Stefanie Jäckel, General Director Strategy & Development Ad Alliance